Christmas is a bittersweet holiday for us. When I was a little girl, Christmas was pure magic. I always dreamed of creating magical memories for my own children when I grew up… complete with decorations in every room in the house, holiday linens, and even holiday towels! I love Christmas. Anna still believes in Santa so it will always be a special holiday for our family. The reason it’s bittersweet is because it emphasizes differences… it’s hard for our family to travel and it’s incredibly hard to buy presents for her. Anna’s interests are so singular and focused. Even with immediate family, I don’t know what to tell them to get her because we don’t even have ideas. With her newfound interest in airplanes, pilots, and flight simulators, I reached out to our neighborhood forum to see if anyone knew any pilots. The response was overwhelming.

During Anna’s very first Christmas, she figured out how to rock her Exersaucer to the tree and put the lights in her mouth. By her second Christmas, she broke every breakable ornament by the end of the first week. We adjusted. We bought unbreakable ornaments and even put a baby gate around the bottom of the tree for a few years. As the years passed, I only had a handful of nice ornaments and Christmas got more and more stressful. Last year, my mom bought me all new glass ornaments and this year I have a real grown-up tree… and I think it turned out gorgeous. Presents Under the Tree I posted a note to our River Chase Facebook page asking if anyone knew of any pilots that we could introduce to Anna as a Christmas gift. We got 20 responses! In addition to people offering to talk to her (everything from retired to active duty military pilots and as well as commercial pilots), we got a plethora of resources to local sites. We visited the Central Texas Wing Commemorative Air Force Museum in San Marcos last week (I’ll try to share those photos soon too!) and learned about the Pioneer Flight Museum in Kingsbury. The best resource though came from two neighbors who knew someone personally… a flight trainer with the Air Force at Randolph Air Force Base in San Antonio. We connected via Facebook Messenger and Miss Laura offered to let us come in and “play” in the flight simulator for 1.5 hours that they use to train their pilots!!! This is a video of Anna opening her last big gift! 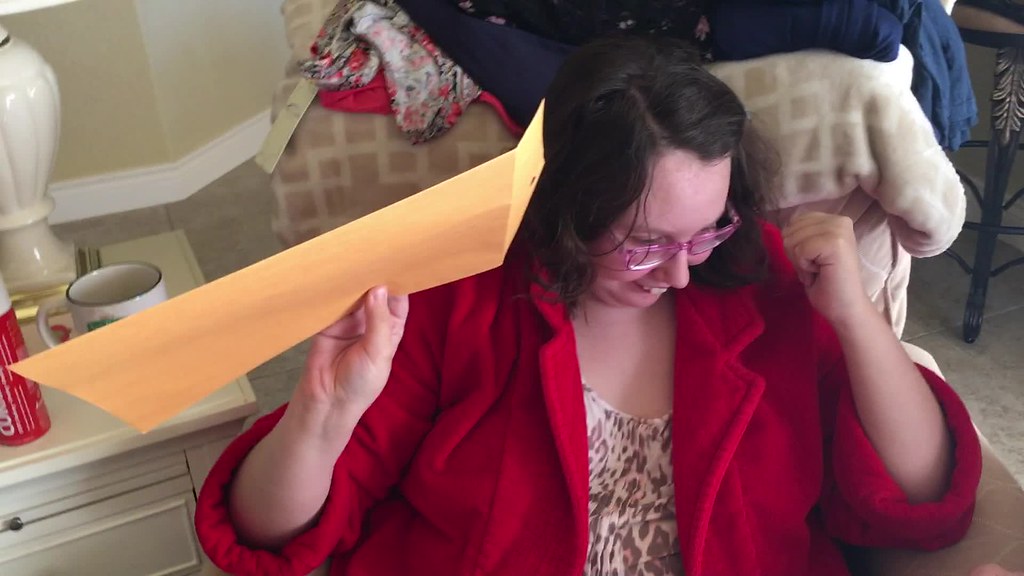 Miss Laura met us at the visitor center at Randolph and hopped in our car; she escorted us onto base and we made our way back to her building. This Air Force base is beautiful… the architecture and layout is actually really well done. This was my first time ever on a military base so I was just as enamored as Anna! Once we got into her building, she showed us her office and had an incredibly professional slideshow to present about her career. She is a bad-ass! She’s been flying for nearly 30 years and loves training students to be Air Force pilots. This is the sim room. That round pod on the left was the simulator we were going to visit. It’s the T-6A Texan II and is the USAF’s primary trainer. Anna was so nervous to enter the sim room. Miss Laura got her a chair to sit down right next to the pilot seat and did some basic training on operating the simulator. She warned us that we might want to hang onto something because the optics do make it feel like you are actually flying and turning. Wow! It was crazy how realistic it feels! Anna got more and more anxious as the flight went on. She even started crying a little that she couldn’t do it. We reassured her that she didn’t have to but encouraged her to at least sit in the seat to try it out. 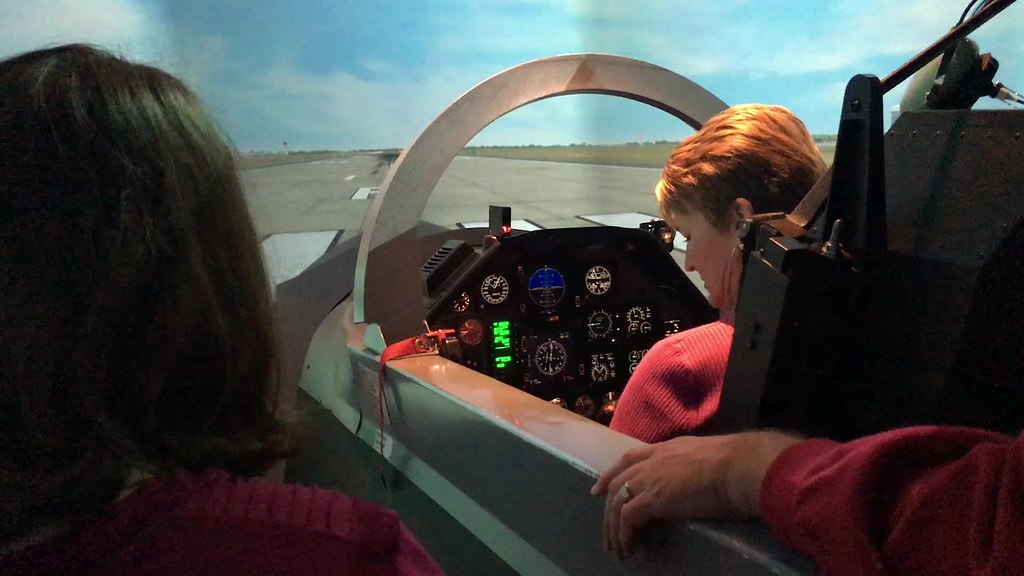 Dominic volunteered to go first in the flight simulator. I expected him to be a little nervous but he was actually just excited! He asked intelligent questions and understood Miss Laura’s directions right off the bat. Dominic in the Sim

Here’s a video of Dominic doing a pull, which loops the plane up and upside down. He then did a roll to put the plane right side up again. Seriously, who is this kid?! 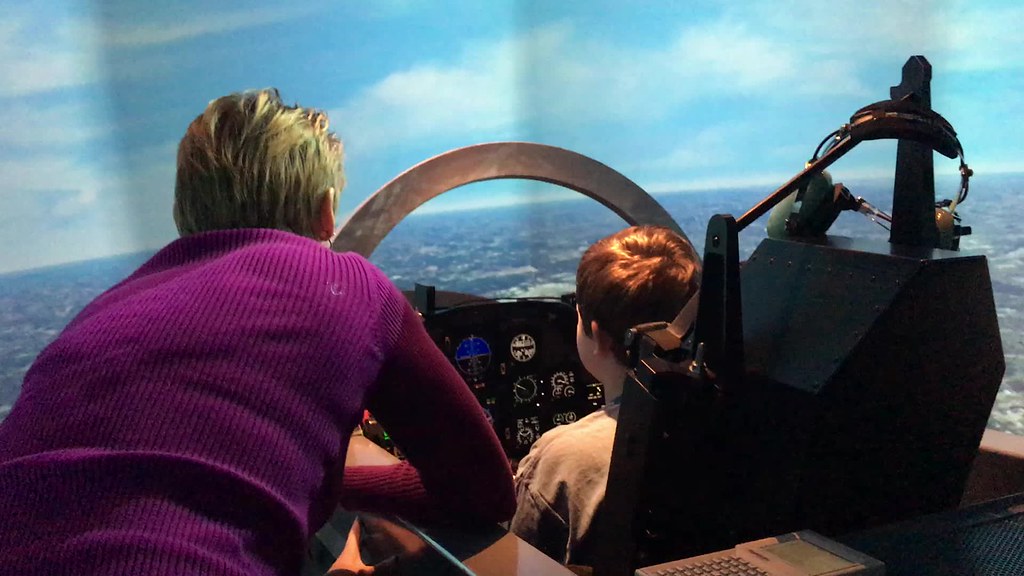 After a short break out in the hall, I convinced Anna to just sit in the pilot seat. Miss Laura paused the flight and Daddy and Dominic worked nearly 10 minutes to help Anna get in the cockpit. There was a short stepstool next to the machine to use to hop in. They got a chair to put next to that she could step up a little higher. Physically, Anna’s limitations are getting more involved, but with a LOT of encouragement and patience, they got her in the pilot seat. She was so happy! I asked Anna if she was proud of herself and she said, “Yes!” We then got her to agree to let Miss Laura fly the plane and Anna could just be a passenger. She agreed to that too! Anna in the Sim

Dominic insisted on sitting next to Anna while she was in the pilot seat. He was so encouraging and taught her all the controls. Miss Laura started out flying the sim, but then Anna said she wanted to do it. This is the video of Anna piloting the flight simulator!!! 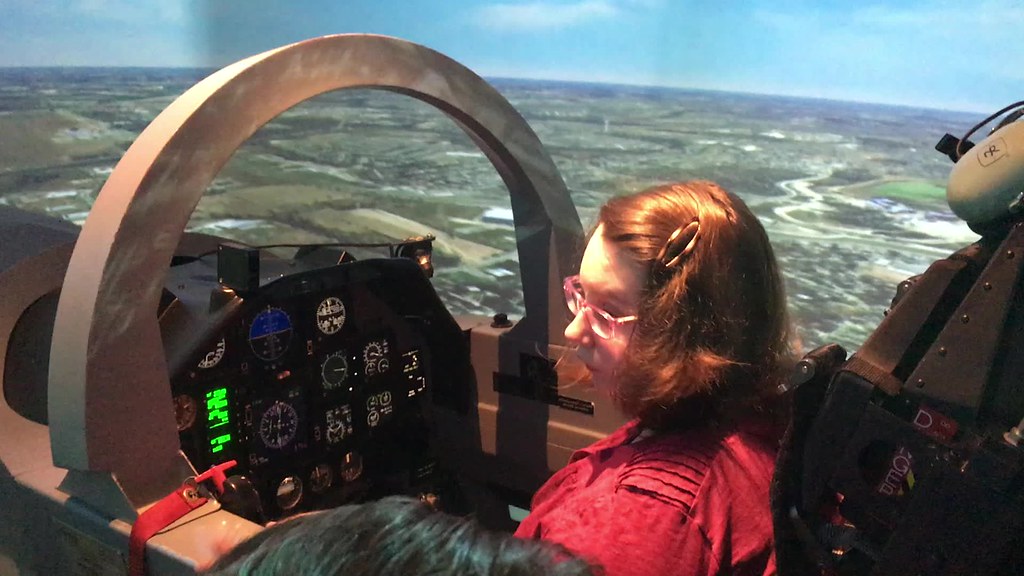 Curtis and I both got a turn in the sim also. It was such a rush! I attempted a landing and crashed, ha! Turns out I forgot to put down my landing gear, d’oh! Curtis did a night flight. He looks like a little boy in this shot. Daddy’s turn flying the plane. He got to fly at night and it was so incredibly beautiful. This is my favorite picture from the whole experience (well except for Anna’s massive smile up above!). The screen went way high and it truly did feel like we were flying. If the pilot does a sharp roll, you literally have to hold onto something so you don’t fall! Dominic finished up with a quick last turn and actually chose to fly in inclement weather where he couldn’t see anything. The screen was dark clouds and you could only see the plane’s lights reflecting on the clouds. He had to fly using the instrument panel only then right before landing, the clouds cleared and he landed the plane. Maybe we have a future Air Force pilot on our hands??? He’s the only family member on both sides to have perfect vision, so maybe… Our hearts were so full when we finished in the sim. Not only did Anna transition from a place of fear and anxiety to pride in her accomplishment, Dominic discovered he has a natural ability to fly. This was a very special experience that happened that doesn’t happen for just anyone and Miss Laura treated Anna like her own daughter. It was especially cool that Anna got to connect with a female pilot and learn about her history. We need more women like Miss Laura in our military! Thank you to our friends and neighbors who responded to our Christmas gift idea and a very special thank you to Miss Laura… this was by far the coolest gift we have ever experienced as a family. Thank you from the bottom of our hearts! Merry Christmas everyone! Thanks for looking!