Heard from the neuro…

Anna’s neuro is not concerned about the change in presentation for Anna or the occurence of the myoclonic seizure cluster after her tonic-clonic/complex partial seizure. What will be different is that we will have to administer Diastat (and should have on Saturday)… he would consider this one prolonged seizure. If the Diastat doesn’t stop the myoclonics, then we call EMS.

I thought those days would be over. When Anna was first diagnosed with epilepsy almost 5 years ago, she would turn very blue and not get enough oxygen; that sent us to the hospital twice. I asked for a pulse-ox and oxygen at home so that we could avoid calling EMS or going to the hospital. Once we had to give Diastat and it really affected her breathing, so I’m not thrilled about having to use it again. More often, we’ve had to use Ativan to stop clusters of tonic-clonics (and we got a new script for that since on Saturday I realized ours had expired in 2007). It has been a long, long time since we needed a rescue medicine. I don’t know why her seizures have changed. Probably 90% of the time, she has a seizure due to fever… this weekend she was not sick. It makes me worry.

She has bounced back slowly. She is very fragile emotionally and very sensitive to noise, even more than usual. She’s also having trouble with her words and pronunciation.

So on that happy note, lol, I’ll share a couple of pictures from Saturday. The first one I edited a bit to make the colors pop and I added a vignette. I thought the little flag in the ground was just so poignant. The second picture is SOOC and I thought the shot turned out so nicely… with Dominic’s back in focus and the kiddie train in the background. Such a typical, all-American, neighborhood parade for the 4th of July. 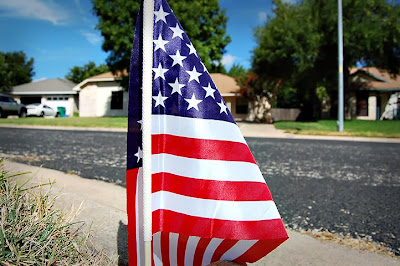 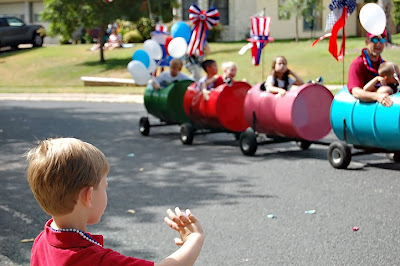 4 months and 2 days »
« Thoughtful Thursday: One of *those* moments