It’s BOB o’clock! and Pixar’s UP

Dominic is so funny. This morning while we were getting ready for the day, he kept saying, “Mom, it’s BOB o’clock!” It took me a minute to realize that he was reading our digital clock at 8:08. He cracks me up. A few weeks ago, Pickle (that’s his nickname from a former babysitter who called him Dominicle-Pickle) says to Daddy, “Daddy, I need to hiccup. I had the hicc… but the up is missing!”

Only 8 more days until Daddy gets back from India!

Jenny got out of school early today because of finals, so we took Dominic to the movie theater to see UP. What a treat! First of all, Anna was taken care of at school and she hates the movie theater… it’s too loud for her and she’s never made it more than 10 minutes once a movie starts… so it was nice to take Jenny and Dominic out. The movie was AWESOME!!! I laughed out loud and got teary-eyed at the end. The first 10 minutes there was no dialogue… just wonderful music and the most incredible animation ever. Pixar produces my favorite movies. I couldn’t believe that Dominic’s attention didn’t wander, he was totally mesmerized. I’m still smiling. 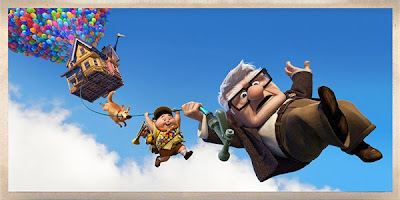