I first want to start off by giving a big WOOT to Jenny for getting accepted into A&M Corpus Christi as an Undergraduate Environmental Science major in the College of Science and Technology. And she got a second letter just hours later with an acceptance to UT in San Antonio! I am so proud of you, angel!

Last week, Anna had a checkup with her neurologist. Since she takes Risperdal, we have to monitor her prolactin levels and weight since this medication affects both of those. I’ve also wanted to talk about options for her anxiety. We actually had a prescription filled for Zoloft before she started kindergarten 2 years ago to treat anxiety but within a few weeks of school starting and having an awesome kindergarten teacher, she did not need it. Anxiety has been a constant presence in her life, sometimes manifesting as aggression, sometimes as sadness, and often you will see her rubbing her upper lip, like in this picture when she was just four years old. 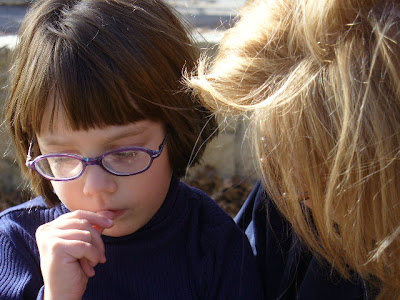 Anna has been showing signs of early puberty, so in addition to talking to the neuro about the anxiety, I wanted to talk about the puberty stuff also. We ended up with the nurse practioner even though I specifically asked for the neuro and even rescheduled a prior appointment just to see him. But I was pleasantly surprised… the NP was wonderful. She noticed Anna’s anxiety right off and talked about different medication options. A couple of months ago, we went ahead and tried the Zoloft but Anna developed a tic with it… she would blink her eyes shut really tight and do it frequently. This child always has such a weird reaction to medications. So we took her off of it, waited a week, then tried it again. The tic returned. So that med is out. The NP suggested Lexapro so we got that filled last week. When I picked it up, the pharmacist said that since Anna is allergic to Keppra (an antiepileptic drug), she might have an allergic reaction to Lexapro too. But so far, it’s going well. It takes 4-6 weeks to build up enough in the system to notice a difference and she is at less than half a dose, so the change may be subtle.

While we were there, I also mentioned the signs I was seeing of puberty in Anna. Having gone through this with Jenny, I was realizing that Anna was about 2 years ahead of where Jenny was. The Risperdal (by the way, this med is for behavior and mood if you don’t know, helping with aggression, agitation, and mood swings) can cause prolactin levels to increase which can lead to early breast development. So we’ve been watching that for a while. Anna’s been on Risperdal for over 3.5 years. The NP referred us to see a pediatric endocrinologist who we met yesterday to talk about the early puberty concerns.

The endo was wonderful, I really liked her. I knew that Anna had gained a lot of weight this year but since the neuro’s scale is in kilograms, I haven’t really been paying attention. I will admit that I have been overeating and making bad food choices in dealing with my marriage problems and that has trickled down to the kids. Sigh. Still, I was SHOCKED to discover that Anna weighed 66 pounds in May and now weighs 92 pounds. She’s also shot up several inches. She’s at the high end of the chart for both height and weight but the endo was very, very concerned about her weight. The Risperdal causes weight gain. Actually, for Anna, it causes her to be hungry all the time, and all she wants to eat are goldfish crackers, peanut butter, and orange juice. We have to make some drastic diet changes for her and for the whole family beginning immediately. The endo also ordered a bone density scan to see Anna’s skeletal age. She suspects that Anna’s bone growth will be a couple of years ahead of normal to compensate for the weight gain. That in turn can cause puberty to start early. So Anna got an x-ray of her hand this morning to see how “old” her bones are. The endo also ordered 18 blood tests. Yes, you read that right, 18 tests. It was 10 or 11 vials of blood and of course they couldn’t get the vein in the first arm. After several minutes of poking around in there, they got the other arm to work. Anna coped so well until the blood finally started flowing and then she lost it. It was this wailing weeping sound that tore through me… poor baby. The endo is checking her thyroid levels, lipids, blood sugars (she said that Anna was primed for diabetes if we don’t get this under control asap), prolactin, and lots of other stuff too. We should have results in about a week or so.

So I am going to register with Weight Watchers online. I made lifetime membership years and years ago (and 50 pounds ago, lol) so I know what I need to do to help her eat better. But I need recipe ideas. This will be such a hard adjustment for her and I feel awful for allowing her weight to creep up so rapidly. She battles so much already!

I almost forgot… I have a funny story from the neuro visit. I had to take Dominic with us which does lead to a more stressful appointment but I really had no choice. The NP was very kind in dealing with our chaos, our noise, Anna’s anxiety, and overall disruption. As we were leaving, Dominic started hanging onto the back of my shirt so I pretended to not know where he was. I kept asking Anna, “Where’s Dominic? Where did he go?” And Anna kept saying, “Right there, mommy. He’s right behind you!” And I would spin around with Dominic still hanging on and hear lots of little giggles. We made it down one hallway and were at the checkout desk and I was still playing this little game with them. We even got the grumpy checkout clerk to laugh because Dominic’s laugh was so infectious. The NP had given them lollipops so they were enjoying those while I was attempting to set up the next appointment (oh shoot, I still need to do that!) and while I was doing the “where is Dominic?” game. Just as another family came up behind us (one with a baby, I might add so Anna starts perseverating on will the baby cry while she is pinching me arm and while I’ve still got Dominic on the back of my shirt), Dominic chokes a little on his laughter and lollipop. I hear Anna say “Uh-oh” and I turn to see that Dominic has barfed all over the floor and the backs of my shoes. Lovely! The family behind us who was a moment ago just beginning to giggle along with us is staring at the pile of puke and is frozen in their tracks. Anna is loudly proclaiming, “Ewww, Dominic puked. Why did he puke, Mommy?” I ask the checkout girl if they have maintenance or housekeeping in the building to call to help (after all, it’s a children’s specialty center right beside our children’s hospital and I’m sure they’ve had some messes before, right?), and she says no. Can you believe that? So I begin this sojourn of trips to the bathroom to clean up my son, clean up my shoes, and clean up the floor. Everyone just watches me, no one offers to help, and by the time we were finally cleaned up and checked out, I felt like hours had passed. Wouldn’t you know that we ended up on the elevator with that same family? Groan. Anway, now I can laugh about it because it was pretty ridiculous.

I’ll keep you all posted about Anna’s test results and if the Lexapro works for her anxiety. Thanks for reading!