Sticks and stones may break my bones
But words will never hurt me.

Is that true? Some words can hurt. A word is a word; how we interpret it ascribes its meaning. The tone of voice, an inflection, body language, and history all play into how a word is taken. I wish I could rise above hurtful words and recognize they are said in ignorance, laziness, or anger but it’s hard to take the high road when it involves one of your own children.

I have a mentally retarded daughter. Anna is not stupid. She is aware that she is different and it frustrates her that she cannot do the same things as others in such an easy, intuitive way. She has to work hard to meet milestones and she does work very, very hard! She also lives with autism and epilepsy… she copes with many challenges every minute of every day and yet she find joy and brings us joy by just being alive.

As I watch my daughter struggle and triumph with tasks such as reading and addition, hearing the word “retard” used in any form makes me flinch. It diminishes her hard work and her accomplishments. She does not have less value as a human being because her brain processes information differently than mine; nor does anyone with this label. The MR label is a way to get services to help her academically. Because of this label, she can receive instruction in reading, writing, and math in a 1:1 setting within her school district. It’s amazing to see the differences in black and white when she is in a resource setting versus a mainstream setting; she is not able to learn in a typical classroom. I am proud of her and I celebrate when she masters something because I know she worked very hard for that achievement. She has gifts and challenges, like every typical child.

There has been a movement to ban the “r” word… retard. It’s rarely used in an accurate, contextual way… more often it’s used to make fun of something or someone that is stupid or slow, to demean someone, or sometimes in a self-effacing way. I have friends who say, “I’m such a ’tard.” Most of the time, the word used in this manner does not intend to offend, it’s careless and thoughtless, but not malicious.

Quite frankly, I’m a little on the fence about banning the word. The “n” word is not a socially acceptable term yet when African-American rappers use it in their music, you don’t see picket signs around record stores or music stations. So where do we draw the line? Is the word “retard” something that should be socially shunned? I say absolutely yes. Words can hurt. But I don’t know that banning the word would accomplish a goal of inclusion… in fact, I think it would bring about more divisiveness. I wish I could rise above the ugliness of its connotations and not let it bother me, but I can’t. I’m forced to get in its face and take a stand. As more and more children with special needs are identified and integrated, we must embrace them, include them, and teach our children acceptance. It starts with us as parents.

A couple of years ago, my oldest daughter was taking driver’s ed. At the introduction of the car crash videos, the instructors said something like, “Yeah, you better be careful or you’ll end up like the retards on this video.” Jenny stood up and talked about Anna; she said that she doesn’t like that term and prefers cognitively challenged. You know what happened? She got laughed at. Someone even said, “Are you serious?” with a derisive tone and threw a pencil at her. I lodged a formal complaint against the teacher and fortunately the director of the agency was very supportive because has a niece with special needs. But I was dismayed by Jenny’s peers’ reactions and it made me scared for Anna. I was also very, very proud of my Jenny. I can’t imagine the courage that took, but she was undeterred by fear… she was driven by anger.

If someone uses the “r” word in my presence, I think about my little girl and decide to take a stand… I think about Jenny’s bravery, I think about being hurt by ugly words myself over the years, I think about Anna laughing with pure joy over something silly, I think about all of the amazing kids I’ve met on this journey, and I take a deep breath saying something as simple as, “Using the word ‘retard’ makes me uncomfortable, would you mind rephrasing that?” Sometimes I’ll go into more detail, sometimes I won’t. I’ve never gotten a negative response.

I’m not asking that you do the same, but maybe just think about how words have hurt you in the past and see if taking this particular word out of your vocabulary would be something easy to do. Pass this post along to family members who use the word if it’s too difficult to talk to them. Talk to your children.

We can each make a commitment to change, as individuals. It’s start with us… today… right now. Thank you for reading this and thinking about my little girl. 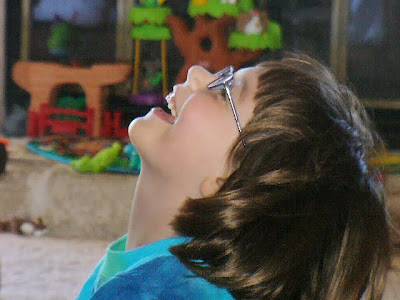